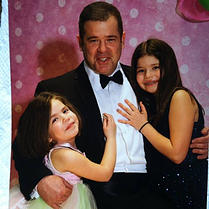 A Boston, Massachusetts native, Solon Zafiropoulos has lived in Massachusetts all his life.  He was born February 20, 1970, the son of Greek immigrants Dr. Pan & Georgia Zafiropoulos who originally came to Boston to attend BU and Radcliffe. After deciding to stay and settle, they raised Solon and his two older brothers in a strict, Christian Orthodox upbringing, always stressing morals and discipline with a firm hand.  Their mother Georgia taught the 3 boys how important it was to believe in God, and being a good person to others by example!

Solon and his brothers were raised bilingual in both Greek and English.  He took a liking to music and entertainment from a young age, unknowingly following in his mother’s foot steps, who was an accomplished opera singer herself back in Greece.  He enjoyed using a tape recorder to create sci fi and other shows with his brother Nick where they would invent characters and write a script.  This was around the same time he started listening monotonously to records of Greek comedian Karagiozi, Frank Sinatra and also Elvis Presley.

His mother enrolled Solon for piano lessons from age 5 where he continued until he was 14 and opted to learn playing Beatles songs instead of comntinuing lessons…and with that he picked up a keyboard and began writing and playing many different songs.  He would later teach himself to play guitar – continuing to write songs, especially for girls he wanted to impress with a customized serenade.  Solon always enjoyed singing, and also doing impersonations of everyone in his family, friends as well as famous people.  He was the center of attention at all the family parties and gatherings.  His love for entertainment led him to the theater where he auditioned for and landed lead roles in every play and musical from elementary school all the way up through college.  It was here where he further nurtured his comedy improv talents in plays like “God” by Woody Allen, breaking Wellesley based Mass Bay Theater’s 30 year old attendance records.  Bored with stage acts, he decided he enjoyed music too much to stay away, and started forming and playing with various bands.

He moved in to Boston in 1998 after graduating from Northeastern University in order to continue performing at New England clubs with his band at the time, Guy Smiley. His following grew soon after his band began headlining the Harpoon Festivals, and after his musical highlight in JAN 2001 when he was asked to headline President Clinton’s Farewell show in Boston’s Matthews Arena in front of 10,000+ adoring fans. His Elvis impersonation is so good, that then sitting President Clinton requested to meet him backstage and exclaimed “I love your Elvis Presley!”

From his childhood years up through today, Solon has put in countless hours to become an experienced and dynamic singer with an uncanny ability to mimic many famous people. Blessed with a rare 4 octave vocal range, some of his best impersonations include – Elvis Presley, Jim Morrison, John Lennon, Paul McCartney, Roger Daltrey, Frank Sinatra, Tom Petty and Joey Ramone as well as famous Greek and American comedians.  An experienced, and sought after corporate entertainer, and respected impressionist – Solon Z will make your special project shine. Give him a day to absorb a voice, and he will imitate it!

As a Singer, Solon has performed in over 1,000 live shows over the years, and logged countless hours in the recording studio. He and his bands were frequently the headline act for the local Harpoon Brewery Festivals, as well as the house band for many of New England’s most popular night clubs, with lines of people out the door waiting to come in and enjoy his wide array of voices. From Newport to Boston To New York to Kennebunk Maine, Solon is well traveled and has experienced many different audiences.  These experiences help him understand his audience and what songs are appropriate for any given time.

As a voice actor, Solon has a warm, natural and sincere voice.   He sounds younger than he is and can easily go from soft spoken corporate professional, to active sportsman, to cool father, to cartoon charachter with his voice over jobs. As a singer, he goes from power singing styles like James Brown, Elvis or Jim Morrison, to laid back easy listening like Frank Sinatra whom he loves as much as Elvis.  He shys away from compliments, and always enjoys talking more about others than himself, something rooted in his mother’s upbringing.

Solon did his FIRST ever stand up comedy set at ImprovBoston’s mainstage in the spring of 2015. His first show received quite a few laughs with his creative spin of Tony Montana sings Christmas carols. Since then, he has been asked to perform more venues where he brings in various impressions filled with unique dialogue!

As a Composer, Solon has several songs he has written since he was a child, of which 1 of them he performed on live Television for the Jimmy Fund Telethon from Nantucket, and many others.

As a Performer, Solon learned piano by age 6, taught himself guitar in highschool, and born with a very strong voice courtesy of his opera singing mother. Along with several bands he performed with in high school and college, he fronted a well established Boston band he founded named “Guy Smiley” from 1995 – 2010.  From being the house band for the popular Purple Shamrock in Fanuil Hall, to the Pelham in Newport, to headlining President Clinton’s Farewell Show in 2000 in Boston, to weddings and corporate events, he has performed over 1,000 live shows. He also performed his original music to audiences, and in recent years founded the successful 24 piece big band orchestra “Solon Z and the Sapphires”, where he is band leader and lead vocalist.  His uncanny ability to do impressions of many famous singers earned him a strong reputation as someone who brings has both recorded and performed several live shows around New England. , spreading reggae Pop  and Blues throughout New England colelges, clubs and parties

Solon has written standup comedy material for himself, and other Boston comics, as well as working on his first upcoming play.  He has an endless imagination that helps him create humorous perspectives on the world around us.

Solon also teaches voice lessons privately, as well as comedy writing. These are both life passions he enjoys most, and has kept him active part time.

In Solon’s free time, he enjoys internet marketing, business investments, and also spending time with his beautiful wife and 3 children.

NYC escorts can provide you with a complete body massage as well as sexually attractive costumes. No matter what you’re looking for they’re sure to meet your expectations. They’ll give you a gorgeous, beautiful woman and ensure that you return to this location often. Most of these services also offer outcall or incall service, which gives you more flexibility in choosing the right escort.

NYC escorts can be booked anywhere in the world. It is important to remember some points prior to you book one. You must first decide what kind of behavior you want your NYC escorts to exhibit. Are you looking to sex with someone for an hour? If not then try asking some of the people who escort you for guidance.